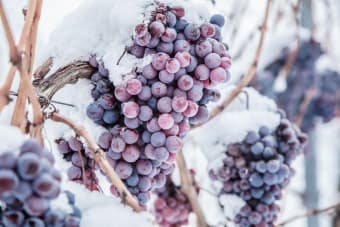 While the ever-popular Icewine steals most of the fame in Ontario for dessert wines, our cool falls and winters are still able to produce some fantastic products without having to dive below -8C for Icewine. These wines would be Late Harvests. While Icewine has very strict regulations that are set, requiring certain harvest temperatures and production, there is a much broader spectrum when it comes to Late Harvest.

What Exactly is Late Harvest Wine?

Overall, Late Harvest wines are typically harvested after the grapes would be harvested for traditional table wines, but before they would go for Icewine. Technically you can do a second press of Icewine grapes after letting the grapes thaw slightly for a few days to produce Late Harvest as well, but for the sake of this, we'll look at them being harvested specifically for Late Harvest.

While technically not under the Late Harvest umbrella, there are some fantastic Late-Autumn wines out there if you're looking for something just slightly sweeter than the classic table wines. Typically done with Riesling and some other select grape varieties, these wines are harvested just slightly after they would traditionally, allowing for a slight concentration of sugars and flavours without becoming a full-blown Late Harvest. Classically these wines are still bottled and sold in 750mL bottles and are generally comparable in price to table wines

Botrytis, also known as Noble Rot, is a very desirable form of rot when it comes to making a dessert wine. The fungus itself, botrytis cinerea, only becomes Noble Rot, and is ultimately desirable under very specific conditions. Noble Rot comes to be when there is high humidity mornings, usually given off from mist or fog, followed by sunny, hot, and dry afternoons. Unlike Late Harvest and Icewine, where there is a physical concentration of sugars and juice, Noble Rot dehydrates as well as transforms the grapes. The fungus will attack the skin of the grape, tearing its way in, which allows for slow dehydration to happen over the course of the growing season. While this dehydration is happening, chemical compounds normally found in the grape are being decomposed, while Noble Rot is adding in new ones. This transforms the flavour in ways that are not possible any other way. B.A. wines must have a minimum of 26 degrees Brix, with Totally Botrytis Affected requiring a minimum of 34 degrees Brix at harvest, which is 1 degree Brix less than required for Icewine.

Botrytis Affected wines have a much more complex flavour, higher in residual sugar, and not something that can routinely be produced every vintage. Totally Botrytis Affected Wines (TBA) are just a more intense form of Noble Rot (think Icewine vs. Late Harvest). BA and TBA wines also age beautifully, bringing out more secondary and tertiary notes such as chocolate, raisins, and dried fruit.

Let Us Deliver Wine Country to Your Door

Shop online and enjoy some of Niagara's best wines at home.

Membership has its Rewards

Join our Wine Club and enjoy some of Niagara's best wines at home.

There are currently no posts available. Please check back.